A -Z Claim -- Fraud by Customer and Amazon Employees

Just a quick word of wisdom here from someone who was defrauded out of $16k a few years back. The FBI doesn’t give a crap about your complaint. This other company flat out committed wire fraud across state lines against our company and the FBI told us if it didn’t exceed $100k, they didn’t have time for it. Bye, bye $16k forever. Because we had wired it, there was no recourse, and the little dirt bag who perpetrated this against us knew it. Went online and was bragging about it (we found out that he had done it to 4 other companies like us in similar amounts) and how he was going to use the money to pursue his career of becoming an actor. We even spoke to both our State Attorney General and that of the state where the scumbag resided. Because we were a business, they told us it was a matter for the courts. The cards are stacked against honest business owners. You gotta take some sucker punches in this business and keep moving forward.

@In-Plain-Sight
Your post is 100% right but unfortunately a lot of sellers here would rather whine and vent about life on Amazon being soooooo unfair. Oh well…

True. If they succeed the first time. The likeliness they do it again is high. It will become a habit eventually.

If one scammer succeed and brag about it, other people (his friend, relatives, spouse, classmate, colleagues, etc) will follow the suit and become a scammer.

The number of scammers on Amazon has grown exponentially and will continue to grow expoentially. Good days are ahead of Amazon 3P sellers.

Good thing is, there are very few scammers on other platforms. I can responsibly say Amazon is the ONLY selling platforms with so much more scammers.

Buyer support wants to give your money away. Even if you talked to them, they would be hard to understand. Sorry

Um, @In-Plain-Sight did literally say the platform is unfair … honest buyers cover the fraud costs induced by dishonest buyers, and Amazon is so buyer-centric that they’d rather let 100 scammers operate than hit an honest buyer with a false positive on a fraud accusation.

In the long run, it would be in Amazon’s best interest to prevent this behavior, because the shrinkage is built into costs, and because a lot of high-fraud products will go away, either because smart sellers won’t carry them, or because building in these costs will make the products non-competitive with other platforms, at which point Amazon’s 'tardy algos will suppress the listings entirely.

A lot of stupidity can be covered up by both scale and market dominance. Don’t confuse Amazon’s success with competence.

Customer shows up with an INR complaint. Amazon with FBM goes like oh but that tracking does not count anymore. No sir, we were just kidding about your valid tracking rate, i guess.

Customer shows up with a charge back claim. Amazon goes like, hey buyer can’t you see the valid tracking? No charge back.

Aaaaaaaamazon, if you can get it right on charge backs, why not with INR complaints?

Right, right. Some sentence with an expletive would be appropriate right here.

The FBI doesn’t give a crap about your complaint.

We’ve dropped the old “mail theft is a federal crime; we will be contacting you local FBI branch to investigate the theft of your package” more than a few times, and amazingly those stolen packages are always located.

I know OP’s case is FedEx and in Canada, but the scammer likely doesn’t have the guts to go up against Canadian authorities.

I find it hard to believe an Amazon CS rep would admit to such claims. Does not make sense.

honest buyers cover the fraud costs induced by dishonest buyers, and Amazon is so buyer-centric that they’d rather let 100 scammers operate than hit an honest buyer with a false positive on a fraud accusation.

We’ve dropped the old “mail theft is a federal crime; we will be contacting you local FBI branch to investigate the theft of your package” more than a few times, and amazingly those stolen packages are always located.

See the image from USPS I just received. When a buyer claimed not receiving, 99% it was actually delivered. 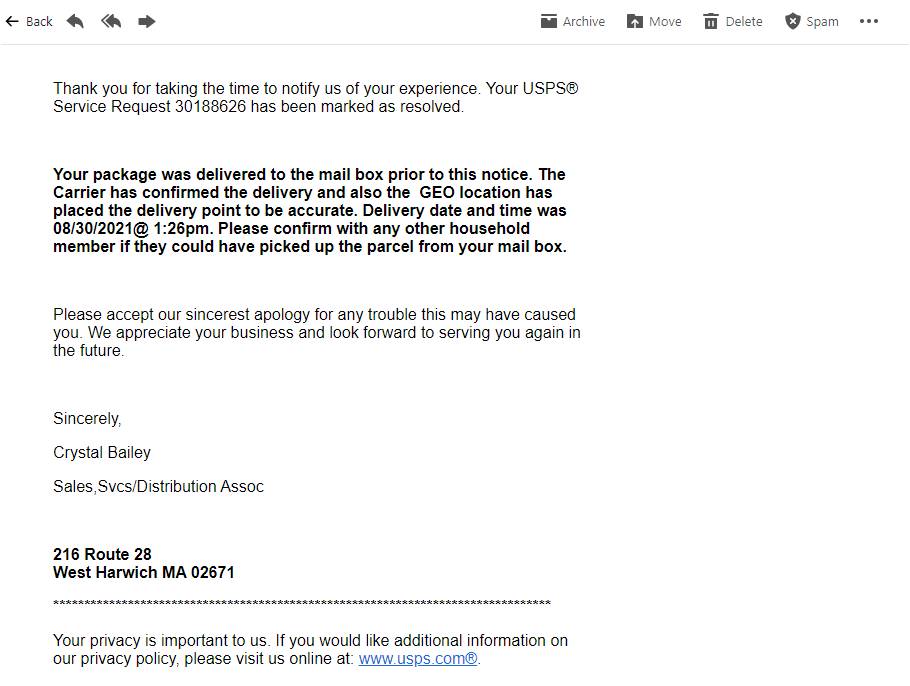 I don’t like amazon as a seller or a buyer. I only like Amazon stock — just put all the $ for your business into $AMZN. The return is way better and you can just relax and do nothing

sell on ebay, they have better seller protection

I agree. When you talk with Sellersupport, ask for the Amazon FRAUD Department or the Canadian version of that. Say: “I am a victim of CRIMINAL FRAUD. Can you help me?” Say it often. If you aren’t allowed to speak with the Fraud Dept directly,( as we were not being too small for them, as a family seller), then ask the representative put you on hold and have him or her speak with the Fraud dept for you.

The few times I had to do this in the US, Amazon fixed it in well, taking a day to a week. Example: Years ago, we sold a rare bible to what turned out to be a criminal book publisher in NJ, who was making fake copies of religious books. They would buy a real rare book and return a fake one. They bought our rare vintage family Bible, about 80 years old, and returned a cheap one with fake leather that still smelled of fresh ink. The copyright page was also a mess, a red flag. I reported that fake publisher, doing a Google search of newspaper articles and found they had worked at that address before they were raided by the police and shut down. Only 2 years later, they opened up again under a new name.

Amazon even thanked me for discovering it and doing the detective work, and deleted the fake publisher store that day. It was so rare and amazing to be thanked.

Note to Amazon: Please train your people to thank helpful Sellers more. We appreciate it!

Also sometimes a criminal gang will try to retaliate and destroy your store or hurt your metrics. We even got death threats once. Watch for similar orders from the same area and cancel them if they are super suspicious, as in, the likely relatives or buddies of the criminals. Make sure to request a removal to any damage to your metrics, as a victim of Fraud. Keep using the word “fraud” with them. They may ask you send a separate email about this.

Hope this helped and good luck.

Cant get signatures on tracked packets or Expedited parcels to the USA from Canada.

Ive also had the same problem now, Amazon is no help at all. Every single time its favored to the buyer!

It really doesn’t matter if you shipped with signature or not. I had quite few experiences. The receiver can simply claim to Amazon that this is not his or her signature. Amazon A-Z will take the customer word. No matter what you do, Amazon will take the buyer’s word. All you can do is to hope the customer is honest. It happened to us so many times and we lost lots of money. But it’s the price you pay these days selling online.

Use Age Proof requirement option with Canada Post, this is the only signature delivery option available because of COVID.

In my settings I can not turn off the auto-approve returns anymore.