A -Z Claim -- Fraud by Customer and Amazon Employees

In my theory you are not out the forty dollars in sales since the sale never existed. It was to a scammer. It wasn’t a sale from the first moment, we just find out later. But to sit and count a sale that was never a sale because it was never to a real customer is deceiving ones self. Uncle Charlie

Ignore the bots respond system, call in and request to speak with captive department from USA.

In my theory you are not out the forty dollars in sales since the sale never existed. It was to a scammer. It wasn’t a sale from the first moment, we just find out later. But to sit and count a sale that was never a sale because it was never to a real customer is deceiving ones self.

Sure it did. The item was shipped to the customer at the cost of the seller, the funds deposited in their account, and likely used towards their budget for the month/quarter, and then at a later time, they incurred the cost of undoing that entire transaction, except for their POV. So how is that not a sale?

It’s Amazon’s job to weed out the “bad faith” actors, as not doing so simply raising prices for their customers, which is antithetical to their primary guiding principle.

I respectfully disagree. You are counting money in the register, which is hard to give back, I grant you that, but it was never real. We have customers who think its proper to purchase a five hundred dollar book so they can read it and return it. I have met these lowlife in real life happily and proudly admitting it in Facebook groups, thinking its cute or something.

For generations people have bought outfits, wore them with the tags still attached and tucked in, and returned the outfits to the store when the occasion was over. There will always be shrinkage and there will always be adjustments in retail, whether brick and mortar or e-commerce. Not to account for it in one’s thinking is going to make a person very old very quick. It seems we have this debate here often in every possible form. I believe its because there are two groups of e-commerce retailers, those who came from a conventional ‘merchant’ background and those who have not. Old school retailers know that there is a percentage of the population that is less than honorable.

Old school retailers know that there is a percentage of the population that is less than honorable.

And that, as a percentage of revenues, their impact is immaterial. If not, then something needs to be revisited, like product lines carried, security measures taken, etc., etc.

You sir have a lot of patience and time to write a long explanation like this. I believe that I don’t have too much of either…

It seems we have this debate here often in every possible form. I believe its because there are two groups of e-commerce retailers, those who came from a conventional ‘merchant’ background and those who have not.

There may be a third group which has more to do with the younger generations. It is the fact that they have ‘‘rights’’. In their mind it is their right to confront those scammers. The scammers don’t have the ‘‘right’’ to do what they do. They see it as being ‘‘wrong’’. That group is pretty well hopeless and in my mind it is a waste of time to argue or even try to have a conversation with them. Again, this is only my opinion and it’s worth what it’s worth, nothing more.

This is where the disconnect lies. If you’ve worked B&M retail, you learn about shoplifters, shrinkage and loss recovery. You learn about the systems and processes your retailer has implemented to protect their business and revenue-- but there’s still going to be shrinkage.

When you use a service like Amazon or eBay, they assure you that they take fraud seriously and have implemented multiple systems to protect you as a seller. They essentially advertise a “no shrinkage” platform. We know this isn’t true, but they also treat every order as if it’s the same size and value. Could a customer walk out of my B&M with an $1,100 50lb exhaust kit? No. Could they claim it was never received and get a full refund from Amazon? You bet. Can I block that buyer on Amazon? Nope. Can I cancel their orders? Sure, but now they count against your cancellation rate. I’ve just removed those items entirely from marketplaces.

The only option is to open your own eCommerce site and use a service like Riskified or Signifyd. Take the 1% fee and consider that as your loss recovery cost centre.

Sorry to say every word you typed is inaccurate, I don’t even know where to start.

Have I seen my staff and myself chasing ladies who had “concealed” fifty pounds of raw meat, steaks and roasts, or God forbid even lamb chops, or a whole turkey, etc, down the block? Yes. Been knocked over by more than one of them in my career, in the last incident, she dislocated my shoulder, when I tried to get in the way and slow her down for the guys chasing her.

Where exactly did Amazon & eBay “advertise” the “no shrinkage” platform you indicated that they advertised, or even do so “essentially”, as you claim?

And do not employees, truck drivers on their way to using my bathroom, housekeepers, visitors and even my girlfriend and her daughter steal from me in my e-commerce model? That has nothing to do with what platform I am on, my own or Amazon’s? Is there no internal breakage of products during handling that amounts to a shrinking of my inventory levels? No spills? No mold? Never saw two books stick to each other in a manner where both become unsaleable?

Normally, on a nice Sunday, I am too busy sitting here in my underwear eating everything in sight and working all day, to respond to and dissect your false and misleading remarks, but this went too far, and with such a tone of certainty, - that you left me no choice.

In 1977 I set up (without a computer, on index cards in some Cardex cabinets) the initial inventory control system for a well-known chain of electronic stores in the New York market, when they had three and a half stores, and were on their way to what eventually became 58 stores. It became uncovered that their warehouse manager, who according to one of the owners, was “like my own brother!” was entering and exiting the building on his own, at odd hours in the middle of the night, in a scheme that involved tripping the alarm to go off, then going there to ‘check on what happened’? You know how many times I have seen that stuff go on in my years? What I haven’t seen, is the operation where no one was stealing… that would be my only first!

In AA we have an expression, it goes as follows. Take the cotton out of your ears and put it in your mouth. It means of course, stop talking and start listening. You write in a very dressy and informed way, with such an absolute conviction that your version is the only possible version that could be correct. I have a brother in law just like that. Perhaps you may know him, Nathan.

We just had an AtoZ awarded to a customer who:

So essentially, because he forgot to select the correct address, now we are out:

ALL of this being customer caused. Yet Amazon holds us accountable for it. How pray tell could we have prevented this?! Increasingly every day, I am glad that our company is diversifying more and more away from Amazon, as the hoops just keep multiplying, and lately it feels like more of my workday is spend dealing with Amazon busywork than it is actually serving our customers.

AMAZON CANADA is working out of all business principles and rules here,. They just refunded fraud customers all money even though USPS official delivery records proved the delivery exactly realized.

Amazon Ca personal never care us, They are working out of discipline and orders like a KINGDOM!

They are now enabled by a mod who deletes anything at all resembling a demonstration of personal or professional responsibility. The Amazon Martyr Brigade and the Amazon Flagging Army have found a friend in the mods apparently.

If evidence from the police or court is provided to Amazon, probably best through their legal department, Amazon will take the actions they deem appropriate with the seller or the customer.

The only proactive action they will take is entirely in their interest - to limit legal action against them. In that case, guilty till proven innocent. Otherwise, innocent until proven guilty and that will require the courts or law enforcement.

I don’t suppose anybody else on the forum has heard of Commercial Business Insurance? If/when the shrinkage is more than you can bear file a claim with your underwriter for the loss(es). It’s not Amazon’s job to explain business 101 to ‘Professional’ Sellers.

As other sellers like to point out recently… DO BETTER. 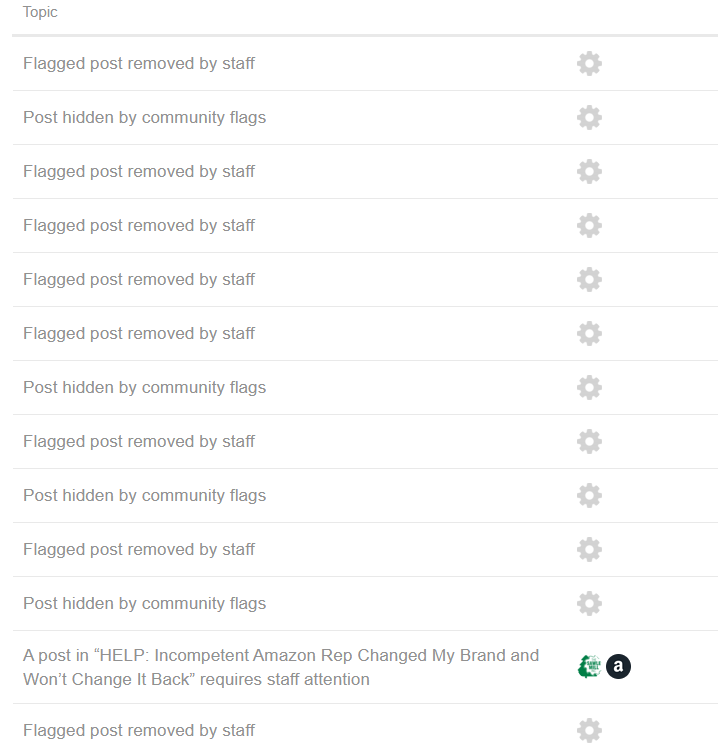 As other sellers like to point out recently… DO BETTER.

One of the reasons I rarely post anymore, the flagging and lack of forum policy enforcement shows no respect for the free help that sellers attempt to offer.

One of the reasons I rarely post anymore, the flagging and lack of forum policy enforcement shows no respect for the free help that sellers attempt to offer.

Ya, I get being terse sends those with micro aggression issues into the stratosphere, but the supporting cowardice demonstrated by the removals is on another level.
Having a post removed for explaining that Xmas trees being returned to Costco on Jan 1, are an example of a liberal return policy that generates profit, is an example of just how far the removals go to appease the sellers with a martyr complex on these ASF.
Of course the flat out lies and misleading information, by all the fearmongers get to stay, along with the comments above toward @Uncle_Charlie and the like.

Not sure “why” you tagged me, but since you did, it gives me this golden opportunity:

Many of your posts deserve to be flagged for being off-topic or downright offensive. I initially enjoyed reading your posts, but you have developed into a chastiser, rather than a helper.

Personally, I only flag for external links, duplicate posts, thread move to a different forum or when someone is extremely disrespectful.

Still use my imaginary ignore button and do not read posts by sellers whom I have come to see as tormentors, rather than helping.

How come a bunch of Americans are here arguing on Amazon.CA?
Am I missing something?

Am I missing something?

Yep. The site feedback posts are published on both forums.

It does not show CA here. My apologies to my friends up North.